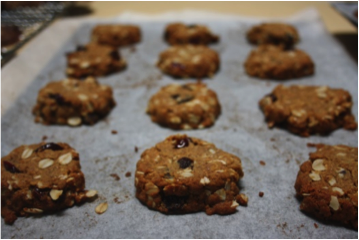 Pre-heat the oven to 150°c. Line 2 flat biscuit trays with baking paper and set aside for later.

In a small saucepan gently warm the coconut oil and honey. Using one of your measuring cups, blend the bi-carb soda with the boiling water and add to the honey mixture. It will bubble up a little.

Add this to your dry ingredients and mix well. Mound heaped teaspoonfuls onto your baking trays, leaving a little room for the mixture to spread. Bake for 20 minutes or until golden.

Allow them to cool on the trays before storing in an airtight container.