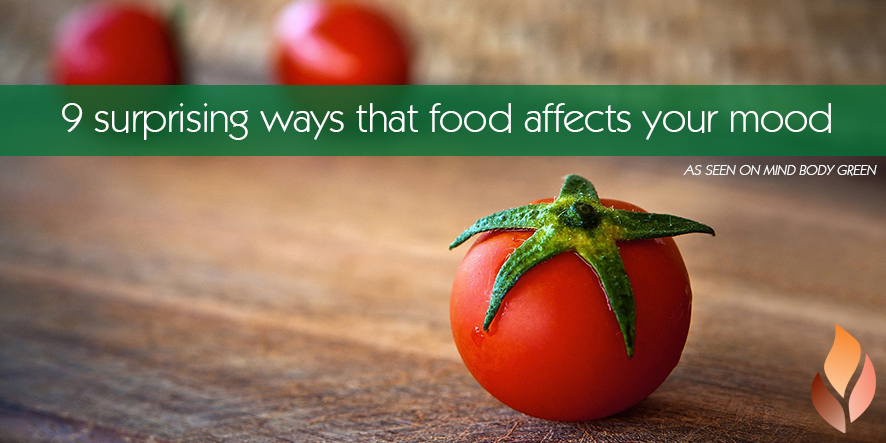 Below I answer questions about the (sometimes surprising) ways in which food can affect your mood:

1. Does the Mediterranean diet protect against depression?

If you aren’t going to Spain or Greece anytime soon, pretend you’re there by copying their diets. Add more veggies to your potlucks, or shake on the herbs and spices to reduce inflammation.

2. Will eating fast food lead to an increased risk for depression?

Eating fast food like hamburgers, sausages, and pizza, as well as commercial baked goods such as muffins, doughnuts, and croissants has been shown to be associated with an increased risk for depression.

Do your best to balance out your food choices with some healthy, fresh options whenever available.

3. Will being in a positive mood lead to eating more?

It’s not just a bad mood that can lead to eating more food. Negative mood and positive mood BOTH lead to more food intake.

This research doesn’t mean that you shouldn’t be in a good mood! Try to find balance in your moods, keeping steady and stable without the extreme peaks and valleys that could cause you to overeat

4. Can you eat yourself into a bad mood in just two days?

If you find yourself in a bad mood, look at what you are eating. You can make some immediate changes that will translate into quick lifts in your mood.

5. Can snacks affect your well-being?

Take note of your snacking behaviors during the holidays! If you find yourself eating too many cookies or indulging in lots of chocolate, shake up your snacking routine by getting some fresh fruit. Your mood will thank you for it (and those around you will, too!).

6. Can your emotions change how foods taste?

A study came out recently that assessed taste and emotions of people who attended hockey games. There were a total of eight games: four wins, three losses, and one tie. The researchers found that positive emotions during the winning games correlated with enhanced sweet and diminished sour intensities while negative emotions lead to heightened sour and decreased sweet tastes.

Take time to taste your food and have awareness that the emotions you are feeling are not only influencing what you are eating but how things taste. If you take your time to eat mindfully, you’ll be more in the moment, and, as the studies suggest, you’ll likely eat less and feel more satisfied.

7. Can being bored drive you to eat?

Those prone to being bored and lacking emotional coping skills can lead to inappropriate eating behavior, like eating when bored or in response to negative emotions.

Being bored is probably the least of your worries during the holidays; however, you may have more downtime which means that you could be looking for things to do. Fill your time with healthy physical activity to keep you pleasantly busy.

8. Does your personality drive your eating habits?

The journal Appetite brought to light many findings about the relationship between one’s personality and eating, including:

Perhaps we can’t change who we are, but we can become more aware of our actions. If you find that you are always on edge and feeling neurotic, try to put yourself in the space of agreeableness and openness, which will contribute positively to your eating habits.

9. Does being a “morning person” make you less apt to eat emotionally?

If you like mornings more than evenings and you find yourself more alert in the early hours, you might have lower depressive symptoms and emotional eating.

Make sure you’re getting sufficient sleep so you don’t crave foods. If possible, try to mirror your rhythm with that of nature: waking up early with the sun and going to bed early when it is dark.

You’ll be more in balance on the inside through the cues on the outside!